WINKLER, Manitoba, Canada – ICON Technologies sits half a mile in from the main highway/vein passing through a small town surrounded by farms and industry. A few minutes away from the U.S. border, the supplier of thermoformed replacement RV parts (fender skirts, A/C shrouds and skylights) is in a prime location. And in tandem with its 20th anniversary, ICON is opening a 113,500-square-foot production facility that’ll allow itself to meet its overwhelming demand and expand into new areas of the RV industry.

Standing inside the ICON offices, a map spread across an entire wall gives an overview of where ICON may be missing. Looking at the about 200 pins of major distributors on the map. It’s not even close to its extensive breadth.

Scroll down for a video showing ICON’s inner workings.

Over the past 20 years, as ICON grew from a 1,600-square-foot office in 1997 to the giant it is today, the supplier of thermoformed parts has built up an arsenal of 1,400 products. The new digs allow the company to have them on hand instead of being made to order. To get an idea of how diverse the products are, there are more than 700 fender skirt models alone, appealing to the most persnickety of customers.

Being on call for custom-made parts, a draftsman is on staff ready to flesh out a new CAD design. It’s ongoing.

“If we don’t have it and a customer can’t find it, they can send us the bust of their pieces, and we’ll design a mold and get it produced,” says Jordan Martindale, marketing manager for ICON Technologies. “We like to listen to our customers and see where the demand is.”

The obvious benefit is that now ICON can reach a new set of customers once it adds the product to its ever-expanding product line. And not much is off the table. Even something like a step trim can find its way into the Specialty Items section of the catalogue. The program has led to quite the success.

“The formalized programs we have in place are for skylights and fender skirts – and this spring has been unprecedented,” he says, half in disbelief. “Just a ridiculous amount of orders sent to us. It’s been quite a bit of a challenge keeping up, but we’re chugging and picking away at them.”

Currently the draftsman has 14 orders in, and they constantly cycle through.

Hung on the office wall is a larger poster of a wireframe detailing ICON’s streamlined process. It’s an ever-evolving game and owes to the 10 growth spurts/structural upgrades the supplier has undergone in the past two decades.

As the new building was under construction, ICON doubled its orders. It’s partly why the supplier will be moving to a 24-hour schedule as well. And the advantage of being slightly removed from Elkhart, Ind., is that Winkler can attract a readily available workforce.

And for visiting RVers so inclined, there are a couple spots just outside the building with full hookups.

“Obviously we need a bit of communication to make sure that’s all kosher,” Martindale says with a chuckle.

Right now, Howard Sawatzky, ICON’s stoic production manager, has a vintage Airstream parked out front, shining like a chromium Twinkie. In his down time, Sawatzky restores retro RVs with modern upgrades. This trailer, nicknamed “Lucy,” is no different. In the before and after photos, the Airstream looks as though salvaged from a violent flood.

“Me and my wife always liked to travel,” says Sawatzky. “We were going to build our own, and then came across, at a wrecker, a 1960 Serro Scotty that was going for scrap.”

After making an offer “for a few bucks,” a passion was born. Today, he has 14 in his collection, including a Nomad which travels on both land and water.

ICON’s philosophy toward its hires centers around personality. Martindale came in as a go-getting intern managing data for distributors to use, so the role of marketing manager was fitting. ICON’s business developer, Harv Giesbrecht, who retired after teaching for 30-plus years, was brought on by Loewen because of his skill and affability.

“(Loewen) really believes in empowering people in the company,” says Martindale. “All of our employees are given the ability to make some decisions.”

“The way John put it to me was: ‘You spent 33 years helping kids figure out how to qualify for a job, so how would you like to see what it’s like to makea job?’” remembers Giesbrecht.

He saw the exciting challenge of expanding a company’s success to drive employment – to learn what conditions were necessary to do so – so that locals may develop a career and ingrained livelihood. Both their daughters played volleyball and basketball together, so they’d met before.

“The greatest part of this is the community that we’re building – not just locally but internationally with dealers, customers, manufacturers,” says Loewen. “The service and the product we can provide to the greater community, that’s the highlight for me.”

It wouldn’t be anything without proper production flow.

“Manufacturing has always been an interest of mine,” says Giesbrecht. “How It’s Made is one of those great shows where you get to see what’s going on behind the scenes.”

The Mold & Development Center, a vast sectioned-off portion of the factory, is in the middle of being set up with piles of crafting tables and supplies huddled about.

In the meantime, thermoformers are in near-constant operation churning out holding tanks, water tanks, and other supplies. As a testament to how ceaseless operations are, ICON’s original thermoformer is still in operation.

In one particularly warm department is a big rotational molding machine. Clusters of molds are on either side of this massive furnace-looking machine where heat flows out. Powdered plastic goes in, and as it begins to melt, it conforms to the metallic mold by coating it. The result is a fresh water holding tank that stacks like large dominos.

Touring the facility, you can see a Dometic Brisk Air aftermarket replacement being born with a robotic arm whirling around providing the final touches. After the products are cast, custom boxes are tailored for each one – foldable cardboard spitting out from a machine like a computer printer.

“We fit our boxes to the product so that it ends up supporting the box, preventing it from getting knocked around,” says Martindale. “It’s a pretty big feat in itself because we’ve got over a thousand SKUs.”

The facility enables ICON to expand efficiently and add equipment as so desired.

More importantly, though: “We have room to think about where there are other avenues of growth in the RV industry,” says Giesbrecht. “Because that’s really what we want to be – an RV service company.

During the luncheon for the opening ceremony, Mayor of Winkler Martin Harder and Member of Legislature Cameron Friesen both congratulated the whole ICON team and handed certificates to Loewen on the achievement.

Founder and CEO John Loewen with Cameron Friesen, member of the Legislative Assembly of Manitoba.​

Giesbrecht was good enough to point out that the small room/garage in which the celebration was being had was slightly larger than where ICON originally started.

So, did Loewen ever expect this would happen?

“Not in my wildest dreams,” he says. With his box-frame glasses and cropped hair, Loewen has the likeness of a soft-spoken Drew Carrey.

“So, the market builds 540,000 units a year, but you don’t really understand how big that actually is. And, what’s the infrastructure required to actually supply that?

“In the two years it took us to design and build (this place), we doubled our business,” he says. That trend first began in 2012. ICON has since grown by 800 percent.

“It’s amazing to me how one guy with an idea decides, ‘Hey, I’m going to start a company,’” says Giesbrecht. “He describes himself as unemployable. He doesn’t want to work for anybody else. He’s got this drive and ambition and ideas and the creative streak in him to come up with something that nobody else saw.”

So, now, after working long days to finalize the facility’s build and always being on, Loewen plans to take a month off with his family.

“The time is here,” he says, laughing. “But I have no idea what I’m going to do with my month.”

Be sure to check out our ICON gallery for more photos from the event. 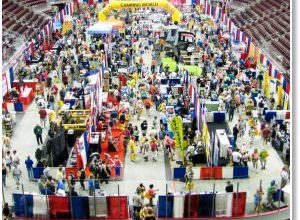 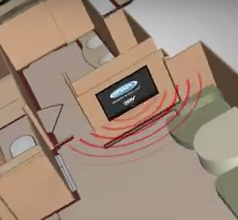 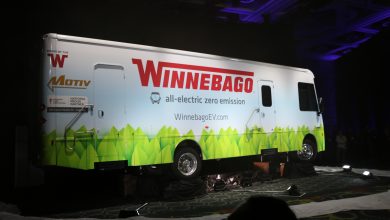