This is Part Three of a four-part series releasing this week. Be sure to check out Part One and Part Two.

Despite its small exterior shell, Lance Camper’s 2075 ultra-light travel trailer takes mighty strides in delivering an open and reliable RV experience. What immediately captivated dealers with the 2020 model – which wears the manufacturer’s newly redesigned clean and modern logo – was rear exterior, slide-out kitchen with a Dometic cooler in a drawer. It doesn’t hurt having a rear, retractable awning to keep the chef out of the sun.

In terms of openness, the Lance 2075 model, with an overall length of nearly 25 feet, utilizes its popular Stargazer, curved front window. The acrylic, tinted Thermopane Euro window paired with a curved bathroom wall leading to the bedroom, creates an optical illusion of more space.

Given the U-shaped dinette on the opposite side of the trailer, RVers are enabled to bask in whatever outdoor surroundings they find themselves in.

“The beauty of this model is that, although its only 20 feet (in box length), there’s good separation from the bedroom and the living area,” says Gary Conley, national sales manager. “A lot of customers like the rear living area because they have full view.”

“For a lot of dealers who didn’t go to RVX, this is their first chance to see it,” says Conley, referring to the 2075’s debut in March at the Salt Lake City trade show. “The key to any travel trailer is to be as small as you can be, and yet have all the conveniences.”

Roof rack storage allows for canoes, paddleboard, kayaks, and most other outdoor gear. Given its overall height of 10 feet, the frontal air-resistance for towing is kept to a minimum. It’s also capable of additional solar panels, lithium battery packs, inverters, and a portable generator.

The Driftwood gray cabinetry and self-closing drawers add to the overall sleekness the travel trailer exhibits. Wine storage next to a dinette with Euro telescoping, adjustable from all directions to let anyone squeeze through. It also lowers, allowing for nearly another queen-sized bed. And the 2075 fits a dry bath with a high-rise, single lever faucet and a glass washbowl that screams quality.

What impressed RV PRO: With a base MSRP of $45,000 and weight of about 4,000 pounds, this travel trailer is well-suited for newer RVers with SUVs or veteran customers wanting big features in a tight package.

Meg Grierson, a sales and product manager for Forest River’s Coachmen division, was touring the California RV Show last year when she spotted a Murphy bed in a Class B motorhome. Soon after she began exploring such an installation for Coachmen’s laminated Freedom Express ultra-lite travel trailer line.

A Freedom Express prototype first appeared at RVX in March and garnered a lot of curiosity, according to Grierson.

“We sent the floorplan to our dealers to get reaction before we built one. We are very big in meeting our customers’ needs,” she says.

The concept underwent some more tweaking before production began in earnest in June on the 195RBS, which features a 60- by 80-inch queen-size bed.

“To my knowledge, it was the first Murphy bed slide-out in a travel trailer,” Grierson says.

The 23-foot, 4,892-pound 195RBS is easily towed by midsize SUVs and half-ton vehicles. Retailing for about $24,000, the 195RBS fills a price point gap in the Freedom Express lineup and is receiving good dealer reviews, according to Grierson.

“We had a gap – plus we wanted something that was a little different than everyone else,” she says.

One of 13 floorplans for the ultra-lite segment, the 195RBS features the combination of Azdel Onboard RV composite panels and Alumicage Construction to maximize towability.

Inside features include massive storage, a U-shaped dinette with front window, an entertainment center with pop-up TV, mid-coach kitchen and an exterior camp kitchen. Options include a power tongue jack, 50-amp service, a second AC, a ladder, a radiant barrier to give additional R-factor and an 8-cubic-foot refrigerator.

“We changed the whole look (of the Freedom Express line) in April; that was great for us,” Grierson says.

The 10-year-old brand also dropped its traditional tan exterior and went back to white. Inside, Grierson and her team have added what she calls “fun” features, such as a futon and climbing blocks for the kids.

The floorplan has no specific target demographic, according to Grierson.

“Everybody, I hope,” she says, laughing, but explains the floorplan should appeal to couples, “empty nesters” and singles. Grierson concedes the 195RBS floorplan isn’t for everyone, but says she believes it will be appealing to certain segments in certain parts of the country.

“Some areas of the country don’t like Murphy beds. Sometimes the dealer has made that decision before letting the customer make that decision,” she says. “The West Coast likes smaller units; the Northeast likes large units, so it depends on where you’re at.”

What impressed RV PRO: When the Murphy bed is tucked away, it creates a very “open” feel for an ultra-lite travel trailer. On the outside, the updated color scheme gives this unit a stylish, sporty look. And while this trailer is small, it has massive storage for its size.

“It will be a huge game changer,” he predicts.

“It’s the most appealing to the visual look of the trailer,” Yotter says. “The feedback from the dealers has been outstanding. They love the look of that sleek, smooth aluminum exterior.”

It appears similar to a laminated unit, so the smooth surface makes it much easier to clean and maintain than standard corrugated aluminum, he notes.

The 192FQS’s exterior isn’t just for looks, however. Two months of testing in the field in 100-degree temperatures in Utah this past summer showed the unit could take the heat – literally.

“We did this to ensure the new smooth aluminum exterior provided excellent performance and durability in the diversity of climates our customers enjoy adventuring to,” Yotter explains.

The floorplan also features “an exceptional solar package,” Yotter says. Features include a 1,000-watt inverter and 40-amp solar controller with a built-in system to monitor battery levels. The controller has the capability to Bluetooth to a smartphone using Renogy’s free BT App to monitor the levels of electric current, watts and amps, record and adjust settings.

“It’s a very helpful tool to make sure you have an awesome experience when you’re out disconnected from everything,” Yotter says. “That’s one of my favorite components to talk about, just because solar has gotten bigger and bigger in the industry. It provides some opportunities to change the way people have camped for years, and an alternative solution to the often overly crowded campgrounds. We’ve seen it evolving, but it’s gained so much traction the last few years.”

The model also features all-terrain tires, a 3-inch lift and a torsion axle so that each tire’s suspension is independent, also delivering a smoother ride with fewer vibrations.

Yotter says the brand remains economical to many campers and is easier to tow and store. Although small, it doesn’t sacrifice comfort and features a comfortable sofa, plenty of counter space, a big 12-volt TV, KING Wi-Fi prep, 12-volt Fantastic Vent fan, a rear cargo rack good for storing up to 200 pounds of gear, a front bike rack, generator prep, a kayak rack prep and a big front window.

The 192FQS also features Aqua View’s Showermi$er, which redirects cold water before it gets to the showerhead back into the freshwater tank until the water is hot. Not a single drop is released until RVers are ready to step into that warm shower. Showermi$er conserves fresh and gray water tank capacities up to 40 percent without changing tanks or adding weight.

The warm acceptance at Open House came on the heels of the Hershey Show, the new model’s first official exposure. Yotter called it “a great launch for retail.”

Production on all three floorplans began in September.

What impressed RV PRO: The new Expedition’s all-terrain tires, 3-inch lift and torsion axle mean this unit can be taken off-road, while its solar package offers off-grid capacity – at an economical price. But perhaps most notable is the smooth aluminum exterior surface, offering durability in a stylish package.

A large window behind the kitchen sink gives campers a great vantage point to view the outdoors and is receiving accolades, while the 10-foot garage readily accommodates the “action campers” who typify the brand’s users today. In fact, the floorplan was inspired by one of XLR’s retail customers.

“They experience the outdoors in a more fulfilling fashion,” XLR General Manager Brent Stevens says to describe his clientele. “They take their interests with them.”

In talking with his toy hauler customers, Stevens and his team found that users didn’t need a huge garage for their toy hauler, so the 3310’s 10-foot garage “is not huge on purpose.” It’s designed to hold a golf cart or motorcycle – but not the larger all-terrain motorized vehicles that many associate with toy haulers.

Action campers “get out and enjoy their surroundings in more diverse ways than normal campers. They tend to use their toy hauler as a base camp,” Stevens says.

The smaller-than-normal garage might underwhelm some observers. After all, the garage on XLR’s mid-entry-point Nitro fifth wheel toy hauler ranges from 11 to 16 feet in length. However, Stevens says the 3310’s got “zero criticism” at the Open House. Instead, he says, the response was “kind of jaw-dropping.”

Make no mistake, the medium-priced laminated Hyper Lite (MSRP around $49,000) is a coach for couples in the 50- to 65-year range who don’t want a fifth wheel and may be full-timers or extended stay campers, Stevens notes.

Other new features in the Hyper Lite brand include all redesigned interiors, 100 percent hard-surface floors and a new optional solar package for boon-docking. A floor decal states, “Dirty Floors Suck!” and directs where floor debris may be swept into for disposal.

With a full family of five XLR brands in its lineup, “for a dealer, XLR is the only brand of toy hauler they need to have,” Stevens says.

“Our product looks the best it has ever looked,” he says of the XLR lineup, which dates from 2007 to 2008 and is a successor to the All-American Sport, which was founded in 2001. XLR claims “the longest-running legacy” in the sport utility trailer market.

“We’re getting a lot more attention at this show than we have in years past,” Stevens says. “It’s directly related to how the product looks and is being perceived by the dealers.”

Meanwhile, the action camping phrase “is grabbing a lot of attention” in social media and elsewhere, he adds. “It will be engrained in the XLR way of life.”

XLR has begun to ship 2020 models from its factory in Goshen, Ind., to its dealer network nationwide.

What impressed RV PRO: XLR illustrates the notion that bigger doesn’t necessarily mean better – when it comes to a toy hauler’s garage. The Hyper Lite 3310’s 10-foot garage should offer plenty of space for many action campers while freeing up extra space to utilize the unit as a well-equipped, nicely designed and furnished base camp. 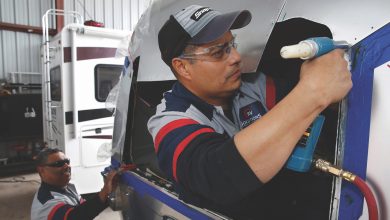 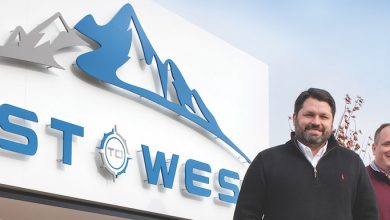 East to West on Course for Growth 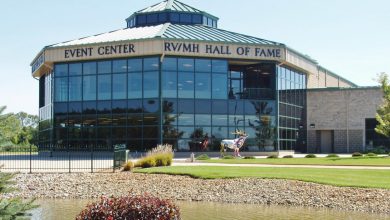 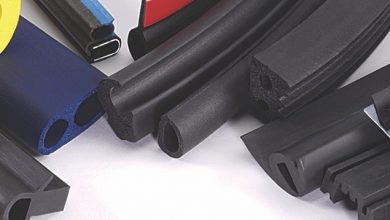