Days Corp. is rebranding itself to better align with its primary business – and to pay homage to its late owner.

As part of that, the company’s two former divisions – Days Distribution and Logistics and Equalizer Systems – will become EQ Logistics, EQ Systems and EQ Harness – all under the corporate umbrella of EQ United.

The move comes as part of an effort to redefine and better brand the company for what it’s known as best, Equalizer Leveling Systems, according to Jason Loose, the company’s chief operating officer. He adds that it’s also an homage to the company’s late owner, Jim Sproatt.

Sproatt started working for Days Corp. when he was 16 years old, mowing the company’s lawn. What started as a mowing job turned into a 54-year career.

Sproatt worked his way up through the ranks and jumped at the chance to become a minority owner. He kept working his way up, and in 2008 got the opportunity to become the majority owner – a risky time for the RV business, which took a beating during the Great Recession – but he did it anyway.

“He had the idea for Equalizer Leveling Systems when none of the other owners wanted to keep putting money into it. He had to keep fighting them – and it’s a good thing he did, because the company probably wouldn’t be here today, otherwise,” Loose says. “It took Jim every dime he had to buy out the last partner who wanted out. He realized his dream and now we’re a company that has 200 people working for us. A lot of that is leveling systems.”

What’s in a Name?

Sproatt passed away January 2019. That’s when Loose and others started to think about the name of the company.

“We started thinking, ‘Why do we still have the name Days?’ Everyone on the team wanted to recognize Jim for the next 100 years and carry on his legacy because he kept the company going,” Loose says.

The four owners got together to consider renaming the company. Loose and CFO Nate Carpenter are minority owners, while Kathy Sproatt, Jim’s widow, and his daughter, Regan Beasley, are majority owners.

“We all got together, sat down, and changed the name. We knew it was the right time and we’re all very excited,” Loose says.

Selling the assets and transportation right of Days Transfer in 1961, Days continued as Days Moving and Storage. This new incarnation offered warehousing and local delivery, machinery rigging and moving, as well as household goods moving.

From the 1970s to the early ’90s, the company continued to grow, including the addition of a franchise as an Allied Van Lines agency. In 1990, the name of the company changed to Days Corp. and included a major expansion in warehousing and distribution, with a new campus of buildings built along the Indiana Toll Road. It was also in the 1990s that the company began to manufacture hydraulic lifting and leveling products for the RV, trailer and specialty vehicle markets. It marked the birth of the Equalizer Systems division.

“When we opened that up and started looking at it, we realized the Days name once served a purpose and made sense. It was owned by the Days family, but we no longer have any Days members that work here. There’s no relation to the family at all anymore,” he adds.

The owners also discovered Days Distribution was just a small part of the overall business compared to Equalizer Systems, which makes up the majority of the company’s business. Sproatt’s passing became the catalyst for change.

“With things changing and us growing in different directions, it was the perfect timing to revamp and think about what we mean to people and what we mean to ourselves internally,” says Rachel Little, director of marketing for EQ United. “We wanted to carry on Jim’s legacy and bring some consistency to everything we do and plan to do in the future.”

Restructuring for the Future

With Equalizer Systems making up the bulk of the company’s business, it was time to create a business model and structure that supported its biggest assets.

“A lot of people know Equalizer Systems as EQ, so it wasn’t a huge change to go to EQ Systems there,” says Loose. “What we had was a real brand issue with Equalizer Systems and Days Distribution. It was too difficult to cross-brand.”

So, the company’s management changed everything, dropping the “distribution” from the name and streamlining the company. “We don’t distribute products; we’re a logistics company,” Loose explains. “People have products, we warehouse them and provide the delivery for customers to the RV market.”

The two divisions became EQ Logistics and EQ Systems, but market growth was pushing for the creation of a third division: EQ Harness.

“We’ve always done wire harness manufacturing for ourselves. We started doing it for other people and it has taken off like crazy,” Loose says.

So much so, that the company is starting an EQ Harness division. All three divisions will fall under the corporate umbrella of EQ United.

“We definitely want to expand. We have made a very large push in the last several years to start manufacturing our own product. We’ve done a pretty good job, but we want to double our cylinder manufacturing and bring a lot of that back in-house,” says Loose. “We’re working really hard to accomplish that. That is one of our top priorities for the next two years. There’s a big growth opportunity for us in harness sales. We’re trying to keep up.”

The next step in restructuring includes a move and split of division locations. The company has purchased a 210,000-square-foot facility in Michigan. EQ Systems manufacturing, EQ Harness and corporate offices will be relocated to Michigan in the first quarter of 2022. EQ Logistics will remain in Elkhart and absorb the warehouse space that EQ Systems is vacating in Elkhart.

“Every day is a battle and I don’t see that easing up. If we can battle that the next two years and not let anything shut us down, that would be an accomplishment,” he says. “We’re trying really hard to become non-dependent on ocean liners.”

Meanwhile, Little is working to create a cohesive look and feel for all the brands with the hope that it will make identifying an EQ United Division more easily recognizable by customers.

She hired a consultant to walk them through the rebranding and to give perspective on the naming.

“He and I did a ton of research on various things to get it right,” she says. “As far as new logos and colors, that was done in-house by myself and my team of two.”

“We’ve dialed it down. Equalizer Systems’ current logo isn’t really outdated visually, but all of the Days logos feel outdated, so the new logos are very clean and all fit into their own little box. They all fall together cohesively under EQ United,” says Little. 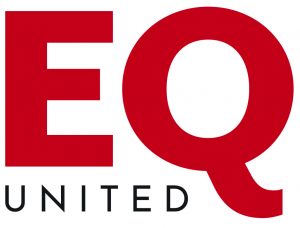 EQ Systems logo is a vibrant orange, EQ Logistics is a bright blue, EQ Harness is purple and EQ United is a bright red. Little says the company has gravitated to more primary colors.

“It helps our customers understand the carryover between our divisions. A lot of our customers don’t realize we’re all one big family. Hopefully this consistency will help them see we’re all one. I’m really excited for all the bright colors and cohesiveness,” Little says.

The websites have already been dialed back from the five or so there originally were when Little came onboard, but they will all receive color and logo changes, as well as new URLs. EQ Harness will be a sub-brand of EQ Systems, and therefore, will be tucked into their website and social media. For any future endeavors the company moves into, Little says if it doesn’t fit nicely under either website, it will go out on its own within EQ United.

“I feel like it’s a fresh new look and fresh new approach. I love the story behind it of carrying on Jim’s legacy. I’m excited where we’re going to go from here,” she says.

“Jim was a big man. Literally. He was like 6-foot, 4-inches,” laughs Loose. “He was a large presence in the room and a larger-than-life guy. His heart was bigger than anybody’s I’ve ever met and you got that if you ever spent more than five minutes with him. Losing him was a terrible loss for the company.

“To change the whole face of the company to honor him this way, he would be having a fit right now because he was such a humble, humble man,” Loose adds. “Everyone here is super, super excited to do this and be moving forward.”