EDITOR’S NOTE: To read this article in its entirety, visit the digital edition of the April issue by clicking here.

If it seems like the pace of mergers and acquisitions in the RV industry is accelerating, you’re not imagining it.

During the past two years, the number of these transactions totaled at least 45, up from 27 in the previous two years and well ahead of any two-year period since the Great Recession, according to investment banking firm Baird & Co., which tracks publicly available data. Baird says that, since 2007, RV-related firms have announced at least 138 transactions.

“Overall RV market M&A activity has returned to pre-recession levels with a meaningful uptick in 2016 and 2017 year-to-date,” according to Baird data, which was generated late in 2017. 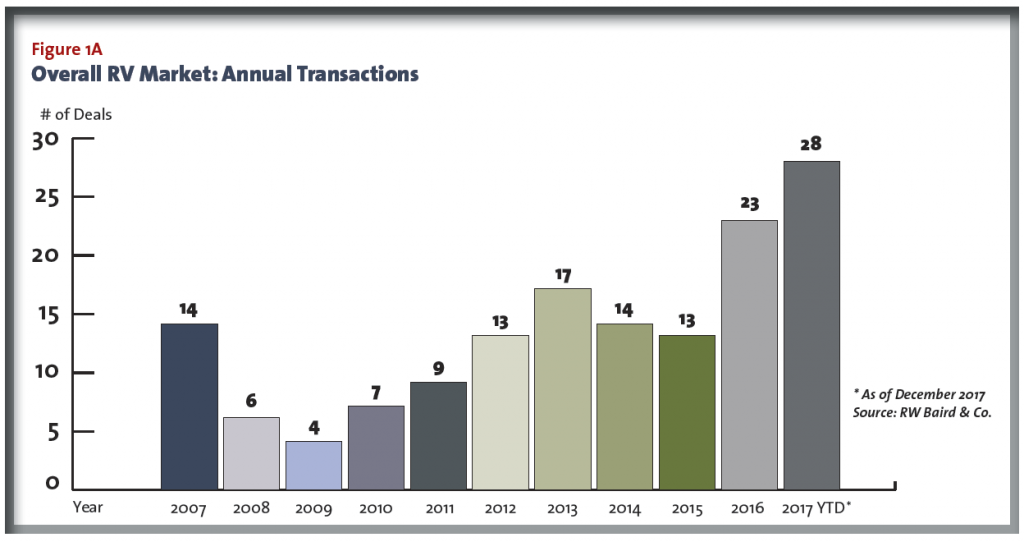 There are several reasons for this uptick. M&A activity for all U.S. businesses has been steadily climbing since the low point of the Great Recession. Fueling this robust trend in particular for the RV industry have been strong consumer demand, low interest rates, significant capital availability and strong balance sheets, according to Eric Stetler, director of Baird’s Global Banking Investment Group.

While Baird does not assign a specific aggregate value of the M&A transactions it counted, Stetler says, “For transaction volume, we currently have $4 billion-plus that is disclosed. Our specific knowledge of larger, non-public deals confidently gets us to $5 billion-plus. I think we can probably say at least $6 billion-plus.”

Notably, Baird limited its analysis to RV manufacturing, supply or distribution, so a number of transactions involving RV-related businesses were deliberately not counted. For example, Forest River’s purchase of bus manufacturer Turtle Top, Patrick Industries’ acquisition of logistics firm Indiana Transport and Brown & Brown’s purchase of MBA Insurance. Another aspect of the RV industry – campgrounds and RV parks – also does not figure into Baird’s data, even though this end use for many RVers has been an active investment target in 2017.

With so much consolidation in the industry over the past decade, “few substantial OEM deals remain to be made,” Stetler says. The key word is “substantial,” given that all of the 70-some vehicle OEMs and 30-some park model manufacturers that remain independently owned would be considered “small” compared to the 2016 blockbuster deals, such as Thor Industries acquisition of Jayco for $576 million and Winnebago Industries purchase of Grand Design RV for $520 million.

Stetler adds, “We see another strong year in 2018 for overall transaction activity supported by modest organic growth, a continued low interest rate environment and significant available cash/liquidity both on corporate balance sheets and with private equity. Tax reform is another catalyst to earnings and deal making.”

Baird’s investment bankers have been working behind the scenes on some of the major M&A transactions in the RV industry in the past decade. Notable deals include the sale of Coachmen RV to Forest River in 2008, all of the public stock offerings by Camping World Holdings and REV Group, the sale of Atwood Mobile Products to Dometic Corp., the sale of Grand Design RV to Winnebago Industries and the recently announced sales of Airxcel to LCatterton.

This activity underscores how closely Baird works with the RV industry. And with an estimated 80 percent of RVs manufactured in Indiana – where many suppliers are also located – that’s where many of the buyers and sellers also are located.

“We travel around Indiana quite a bit,” Stetler says.

Managing Director Kevin Keuper says, “Four of the five partners at Legacy Capital, as well as two of our advisory board members, have recently been in Northern Indiana working on deals. M&A activity has been quite active.” (Keuper was interviewed for this story in November.)

When asked what constitutes a good deal, Keuper says, “When the seller receives a very good price, great terms and a great home for the management and employees, while the acquirer derives synergistic value in the acquisition, it’s a good deal.”

Sellers sometimes stay on after the sale to ease the transition; sometimes they leave immediately. Sellers are typically required to sign non-compete contracts reaching out four or five years.

A third player behind the scenes is Mark Sage, an investment banker and managing director of Tampa-based Wyndham Capital, who has worked as a mergers and acquisitions consultant back to 1979. Since 2013, his firm has represented three RV manufacturers as well as five modular/HUD manufacturing firms that were sold.

“We’re in discussion with two manufacturers and a retail dealership who are interested in selling. It’s a matter of timing, waiting for end of year numbers to come up,” Sage told RV PRO in late 2017.

Compared to other sectors covered by Baird’s consumer and industrial groups, “RV has experienced generally more OEM consolidation and increasing activity in the supply chain and distribution over the past few years,” Stetler says. “The centralized nature of the industry has been a likely key factor.”

As merger and acquisition activity has intensified in recent years, many have questioned what it means for the future of the industry, and some have lamented the loss of mom-and-pop businesses to larger, more corporate companies. For their part, though, the Baird bankers see consolidation as positive on the whole.

“OEM and dealer consolidation, as well as better management of consumer and trade credit and inventory at all levels of the RV value chain, have improved the industry and created an environment for sustainable growth,” Stetler says. “OEM and supplier consolidation generally creates larger, more financially sound companies and enables deeper, more balanced relationships.” 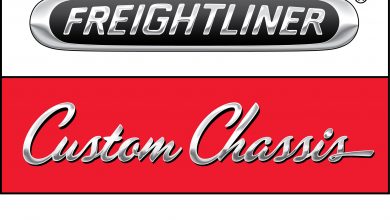