Solar power, lithium batteries and WiFi. These are a few of the favorite things on the modern recreational vehicle. Some of the RV evolution is tied to gadget-tech, and some to the transition to newer and better materials. Some wood frames were made obsolete by the emergence of aluminum designs. We’ve seen manufacturers move from a delicate paper décor to a tougher vinyl version. And for many OEM’s, lauan plywood gave way to the Azdel Onboard composite material in a variety of areas, including the interior side of the laminated sidewall.

While some technologies or materials are the best available, and will be for some time, others may be mere stepping stones. Take décor, for example. Vinyl proved superior to paper, but was ultimately still laminated to lauan. Then vinyl on Azdel came along. Better, but still just a stepping stone.

What if there were something that outperformed even vinyl?

DuraBlend is a “pre-preg” polypropylene material bonded directly to Azdel’s popular RVX substrate during its production process, so no additional glue, machining, time or labor is required. The result is a cost saving that is passed onto the OEM. But Azdel didn’t stop there.

Considerable testing was done on DuraBlend to ensure that it is a truly viable and practical solution for both the RV OEMs and the owners. Testing aimed at common concerns included a stain and solvent test, a mold growth test, and an adhesion/peel test after samples were subjected to accelerated environmental aging processes. 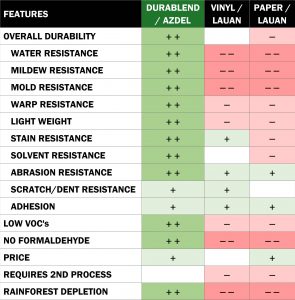 First, DuraBlend composite panels were compared to traditional decorative vinyl and paper materials, both bonded to lauan. It’s been well documented that mold does not grow on the Azdel composite, but does grow readily and extensively on lauan. As is always the case with standard RVX material, no mold presented itself on the DuraBlend décor test.

Then DuraBlend passed the peel test. The bond was strong enough that the peel could not be initiated on the DuraBlend sample. It simply would not separate.

Finally, in the stain and solvent test, each sample was subjected to 15 potentially destructive and/or staining agents for durations of one, two, four and 16 hours. The effect of each substance was then evaluated at each interval with a score ranging from 0-no effect, to 1-moderate effect, to 2-severe effect. The lower the number, the better the resistance.  The individual ratings were averaged, yielding an overall value.

It was expected that DuraBlend would outperform the standard paper décor, and would compete well with the vinyl, but nobody predicted the dramatic drubbing that resulted.

Across all three tests, DuraBlend stands out substantially. Combined with its other favorable qualities, it’s easy to see why DuraBlend should be the new RV interior choice for OEMs and owners alike. 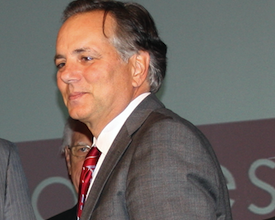 Spirits, Business, Attendance All Up at RVDA Convention/Expo