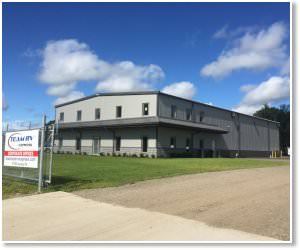 “(It was) me, my partner and the guy who got paid,” co-founder Mike McGee said.

McGee and his father-in-law, Peter Tremblay, founded the company after the pair saw a business opportunity in the eastern Canadian RV transport market.

In the early days, it was a bare-bones operation, for which McGee conducted new-driver orientations on-the-fly, from the hood of his pickup.

Not long after the company was started, it was forced to weather the Great Recession, which dwindled its transport drivers from 30 back down to three, but McGee explains that he emerged from the economic crisis with a stronger company.

“What gave us a solid place in the market was when we went (to a dealer pick-up model),” he said, referring to the transportation model that allows the dealer, rather than the manufacturer, to decide who transports the RV.

Today, the company employs 23 full-time and two part-time employees, owns a 10-acre storage yard in Bristol, and conducts its orientations in its year-old Middlebury, Ind., headquarters.

Earlier this year, when Lifestyle Luxury began its “Ready to Roll” pre-delivery inspection program, it didn’t have to look far to find a company to facilitate the program.

“We’re located almost right across the street from where Lifestyle builds high-end fifth wheels, and we started doing some PDIs for them, and it’s grown into Ready to Roll,” employee Mike Mellstead said.

This week, Team RV Express began an expansion of the Middlebury facility to add four inspection bays to the five currently used.

Although the company attributes much of its growth to its Canadian customer-base, Mellstead said Team RV Express is gearing up to take on more customers, especially in the U.S.

“We do have more U.S. customers now than we’ve ever had, though that sounds more romantic than it is, because we’ve never had a whole lot of them,” Mellstead said.

While growing clientele south of Canada, McGee has no intention to slow down the company’s Canadian business, noting that recent expansions should more than facilitate customers on both sides of the border.

“We are intentionally recruiting more American drivers than we have in the past and we believe that our 25 acres of yard space will be adequate to accommodate our current base of customers and the new customers we hoped to gain,” McGee said.