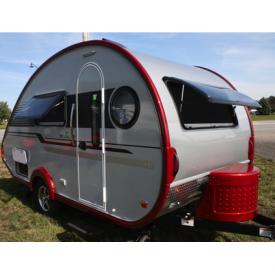 NüCamp RV in Sugarcreek, Ohio, south of Canton, has pulled 225 jobs and $50 million in annual sales from the over-the-road version of the tiny house and some larger trailers it makes, according to Crains Cleveland Business.

The company says it’s churning out about 4,300 units a year; almost all of them are made because a customer has ordered it.

Hubble was a distributor of the teardrop trailers before he joined the company in 2010. That’s when Hubble said he and nüCamp owner Joe Mullet drove to Elkhart, Ind., and acquired the U.S. rights to make and distribute the trailers — which are a Danish design — from Thor Industries.

At the time, nüCamp had eight employees working in a 12,000-square-foot shop in Sugarcreek.

Today, the vastly larger crew buzzes about a new 150,000-square-foot factory. Hubble said nüCamp built the plant, originally at 90,000 square feet in 2014, expanded it by 60,000 last year and will probably do a similar expansion next year.