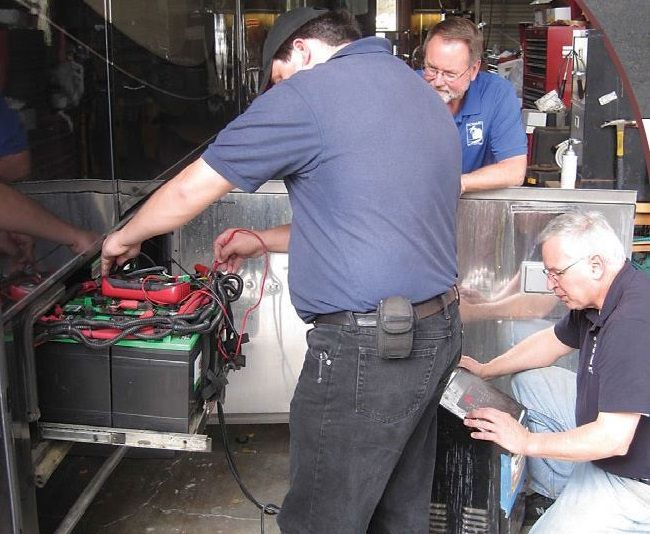 With the region coming off a tough winter, many New England dealerships find their service departments full and techs in high demand, making it difficult to spare service workers for training seminars, dealers report.

Numbers in training seminars reflect the issue, too, according to officials from the New England RV Dealers Association.

Lippert Components and Dometic are among suppliers hosting events, which have seen marked attendance drop.

Lippert will host training seminars in consecutive days in Boxborough and Sturbridge, Mass., Wednesday (March 31) and Thursday (April 1) next week. A week before the courses, the combined registrants for the Sturbridge courses was 21.

Frank Roberts, who owns Long View RV in Hartford, Conn., will send four of his six technicians to the training, noting that attendance is typically near 50 or 60 for similar courses.

“I could really use those four guys in the shop, but from what they get out of it, it would be a better investment to send them than for them to miss it,” Roberts said.

The cost to Roberts is not insignificant. Like many dealers, Roberts’ techs will get paid hourly for the time spent in training and the dealership covers the tuition cost.

For Bristol, Conn.-based Crowley RV Service Manager Ryan Smith, its tough to find time for in-dealership training this time of year, much less sending techs to train outside the dealership.

“Even if (the training) is just sitting upstairs in the conference room to get certification stuff set up. You wind up sacrificing some stuff because at the same time your losing training time, so the guy that’s going out there to work maybe doesn’t know 100 percent, so he has to re-learn (on the job),” Crowley said.

The issue is partly due to the weather this winter, which hit New England particularly hard, stopping many techs from travelling to winter training sessions.

Dave Simson ranked January and February as some of the worst winter months he’d seen in 45 years owning the Danbury, Conn., dealership.

“Never in my life in business, have I had a January and February like this year. At minus-10, they’re not coming out and walking around the lot,” he said, adding that while shopping slowed, service requests remained steady.

“I wish we could send our techs, they can always use training and refreshers, but unfortunately we’re so busy that we don’t have time,” he said.

“That’s another problem. Finding help in this area is tough,” Simson said. “The numbers just aren’t there.”

For more information on technician training in New England, dealers may contact NERVDA.