The Elkhart-Goshen metro area is the third most likely in the country to be affected by automation, according to a new report from the Brookings Institution.

Only Dalton, Ga., and Kokomo, Ind., have a higher automation potential, the report said. Automation potential refers to the share of tasks in an occupation that could be automated with current technologies, and for the Elkhart-Goshen area, that applies to 54.6 percent. Indiana, at 48.7 percent average automation potential, is highest among states, while New York is lowest at 42.4 percent.

“And RVs have been one of the most labor-intensive vehicles, because it’s not automated in the same way as, say, assembly of pickup trucks here in Fort Wayne is. But those days may not last forever and are likely not to,” she said.

Automation is likely to mean a loss of some manufacturing jobs, observers said.

The hope would be that people who are laid off could go into new or growing industries.

Indiana’s and Elkhart County’s mostly flat population growth may work to their advantage given the possibility of a surplus of people who may be looking for employment, Blakeman said.

“As much as we would like to have more people move to Indiana, the reality is it’s not happening on a broad scale in the same way that it’s happening in Texas or the Carolinas,” she said.

Winnebago Builds a More Accessible RV to Help Everyone Get Away

FEMA Trailers to Arrive in California 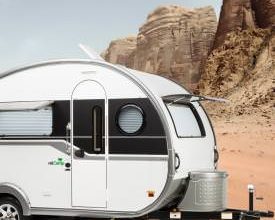