The U.S. Environmental Protection Agency released its final rule this week on formaldehyde emissions from composite wood products. The final rule was published in the Federal Register on December 12.

RVIA has been engaged with EPA throughout this rulemaking process, which began following Congressional passage of the Formaldehyde Emission Standards for Composite Wood Products Act in 2010. This act established a new Title VI to the Toxic Substances Control Act (TSCA) to regulate formaldehyde emissions. EPA released its proposed rule in April 2013 and RVIA submitted a comment letter in October of that year.

The final rule is a vast improvement over the original EPA proposal, as EPA worked closely with the California Air Resources Board (CARB) to develop implementing provisions that are consistent with the CARB requirements that RV manufacturers have been meeting for several years now. However, the EPA did not mirror all of the CARB requirements, particularly the CARB exemption for laminated products, many of which are used in the manufacturing of RVs.

EPA proposed chain of custody, recordkeeping, and labeling requirements that were similar to those under the CARB rules, reasoning that these requirements also support compliance with TSCA Title VI without undue burden. Below are some areas of concern that RV manufacturers should be aware of as they prepare to comply with the EPA formaldehyde emissions standards.

Beginning December 12, 2017 (one year after Federal Register publication of the final rule), fabricators will have to keep records that demonstrate that they have taken reasonable precautions that the composite wood products are compliant. They must also maintain these records for three years, one year longer than the current CARB requirement.

Fabricators of covered laminated products also have one year from the rule’s publication date to label the finished goods as being “TSCA Title VI compliant”.

Entities are free to combine the TSCA Title VI labels with CARB labels so long as all the required information is present, legible, in English and accurate.

There are a number of ways laminators can lessen or avoid the testing and certification requirements. First, the EPA does exempt two types of laminated products from the definition of “hardwood plywood”: 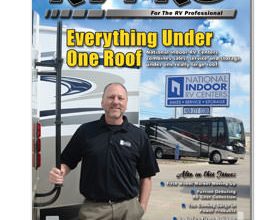 Gallery: Winnebago Goes to the Desert