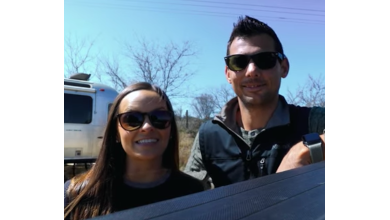 Christina and Sean Conlon, after the deep freeze finally broke.

Barely two months into what will be a year-long odyssey, traveling the country in their new-to-them RV, Sean and Christina Conlon found themselves in a completely unexpected and uncomfortable situation in the least likely of places.

The couple were at an RV park in San Antonio, Texas, when the deep freeze that hit the Lone Star State rendered their coach without water and/or power for multiple days. They’re documenting their entire journey so you can watch a 20-minute video here depicting that portion of their trip, but they’re quite happy to have that episode in their rear-view mirror.

The Conlons are on what they’re calling their “Paws For Love” tour, designed to raise awareness and interest in therapy dogs, something near and dear to their hearts and embodied in their 2 ½-year-old golden retriever therapy dog, Nash. Lippert is one of the main sponsors of the tour.

Therapy dogs are different than highly trained service dogs or emotional support animals. A therapy dog is trained to bring comfort, whether it be to kids in a classroom, older folks at a nursing home or even to first responders at the local fire station.

With COVID going on last year, the Conlons had to stop taking Nash around to his usual visits in their hometown of Nashville, Tenn.

“Since he got trained, his purpose is to be around people,” Sean Conlon said. “He was social for hours of the day, around people. And then all of a sudden you come to a screeching halt.”

So, Nash got depressed, the couple said. And while their work as consultants kept them busy, they started going a little stir crazy themselves, they said. So the pair came up with a crazy idea – or what they now refer to as a “calling.”

“What if we just traveled the country and went out and met other people with therapy dogs, and helped them find creative ways to serve? It was almost out of a search for ourselves,” said Sean.

So the couple is traveling from city to city, where they connect with local therapy dog organizations and interview owners like themselves about their experiences.

The Conlons decided an RV would be ideal for making their dream happen – even though neither had any RV experience.

They sold most of their possessions and purchased a 2017 Grand Design Reflection and a pickup truck to pull it with. A mutual friend introduced them to Jason Lippert.

“They approached Jason last year regarding this Paws For Love concept that they had, where they are going on tour to show communities the powerful impact that therapy dogs have,” said Michilah Grimes, director of corporate and community impact at Lippert.

“(Jason Lippert) was like, ‘Yeah, absolutely, this is right up our alley,’” Sean Conlon said. “We learned more about Lippert and the ‘LCI Cares’ program and just how much they do for their local community – how much they invest in their people. And Christina and I both looked at each other like, ‘Wow, if we could have a perfect partner to do this with …’ Not only because we have no idea what we’re doing in an RV, but a company that truly puts their money where their mouth is and invests in their people, which is what we believe in. You couldn’t find a better partner.”

Lippert has pledged $25,000 to be a presenting sponsor of the year-long trip, and the company has also provided a host of products to the Conlons, ranging from a Tire Linc tire pressure and temperature monitoring system and accessories to a Flow Max 40-volt portable power cleaner.

“We want to help them make this journey as easy as possible, so whatever products we have that can make their journey easier … because they’re going to be living out of this RV for a year, going to different cities to spread the word on therapy dogs. We felt this was an important mission, especially now (with COVID),” said Grimes.

The Conlons turned Nash into a celebrity well before this RV tour. Christina had launched an Instagram page she called the “Daily Barker,” and within two years it had more than 500,000 followers. For the Paws For Love tour, the couple created a YouTube channel under the same Daily Barker name. It’s the best place to follow their adventures, they said.

“They’re still finalizing their itinerary, but Elkhart is on the list,” said Grimes, adding that’s where she’ll get to meet them face-to-face. Meanwhile, “They’ve never lived in an RV before, so as they travel, we’ll be able to evaluate what they might need going forward.”

As for the Conlons, they said in one recent video that going from living in a 1,700-square-foot home to about 300 square feet in the RV has had a profound effect on how they see all aspects of their lives.

“Yeah, it has been way better,” Christina said. “Better than anything that we could have dreamt up, and the truth is it hasn’t always been easy.”

For more on that last part, see the couple’s latest video, filmed during the multi-day, sub-freezing cold snap that sorely tested the RV newbies. It made for some pretty horrendous nights, but it’s a part of their adventure they’ll never forget. And Nash really, really seemed to love the snow. 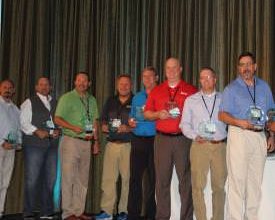 RVIA Reflects On 2018 and Looks Ahead