An explosive fire charred a service center at an RV dealership in San Marcos, Calif., creating a plume of thick, black smoke that could be seen for miles Sunday afternoon, the San Diego Tribune reports.

The fire sparked at the Holland RV Center at 3:55 p.m., San Marcos fire Chief Brett Van Wey told the Tribune. Flames shot from the dealership’s service center as firefighters arrived, and they quickly called for backup.

It took about 70 firefighters an hour to put out most of the blaze. Crews were able to keep the flames from spreading to the nearby sales center and Camping World, which is next door.

As crews beat back the blaze in the town located about 40 miles north of San Deigo, several explosions went off inside the building. A hazardous materials team was called to check for unsafe chemicals, and Van Wey noted that it’s not uncommon for RV dealerships to keep propane tanks on site.

Crews stayed out of the burning service center, which was closed when the fire sparked, in case the building was damaged by the fire.

The cause of the fire is under investigation. A damage estimate was not available. 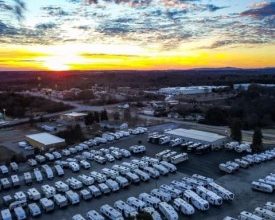 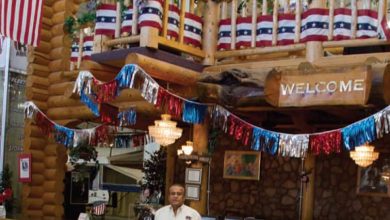