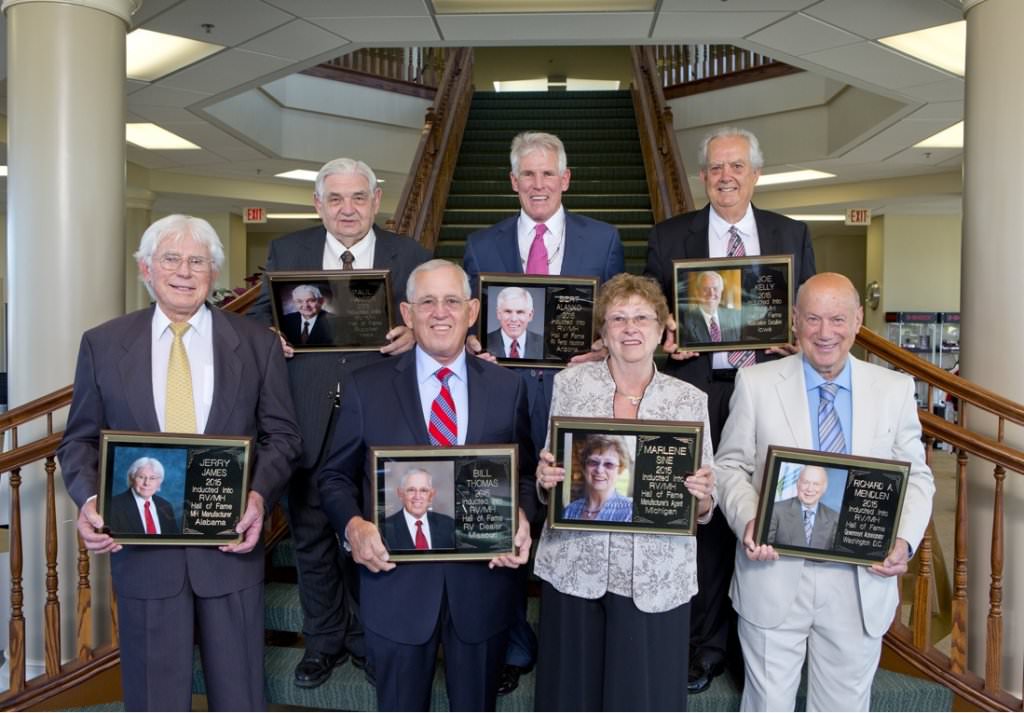 The RV/MH Hall of Fame inducted its 2015 class during a ceremony Monday night at the Hall of Fame’s Event Center in Elkhart, Ind.

The event followed a cocktail and social gathering for the 10 members of the 2015 class, their friends, family and guests, and featured brief remarks from some of the Hall’s newest members.

Among the 10 members honored in the 2015 class, 50-year industry veteran Marlene Sine, of Marlene Sine and Associates, said she was touched by the amount of support she and the other inductees received from the crowd of about 350.

“It is truly a great honor to receive the most prestigious award in the industry,” Sine, who was the RV industry’s first woman manufacturer’s agent, told the group in her speech.

“To me, every product was a challenge, so I always wanted to do my best for the supplier, distributor, dealer and consumer. I have been so fortunate to have been a part of this amazing industry.”

Prior to the induction ceremony, Hall President Darryl Searer delivered his annual “State of the Hall” address, where he reported that the Hall continues to pay down its debt, and has “continued its upward trend of improving” over the past year.

“I am extremely happy to report to you that your Hall has continued to improve financially for the third straight year and is now in the best shape it has ever been,” Searer said.

Searer reported that the Hall’s debt has been reduced from $5.5 million three years ago to approximately $1.5 million today.

“This progress is due in part to the generous support of both RV and manufactured housing (industries),” Searer said.

“Each campaign is committed to raising $1 million each. The MH Industry has challenged the RV Industry to match their campaign, which has already received gifts and pledges for over $570,000. The RV industry’s gifts and pledges nearly $100,000,” Searer said.

Searer also noted that two years ago, the Hall borrowed $600,000 from the bank to pay off the commitment made to David Woodworth for the purpose of acquiring his famous antique RV collection.

“That debt now stands at $75,000 and we expect to eliminate that debt within the next few months,” he said.

Searer also presented the Hall of Fame Spirit Award to Don Magary, Hall of Fame member and publisher of RV News. The Spirit Award is an annual award to honor the person who has demonstrated his or her desire and dedication to further the legacy of our great heritage.