Interior Secretary-designate Ryan Zinke testified before the U.S. Senate Committee on Energy and Natural Resources, which is considering his nomination to serve as the nation’s 52nd Secretary of the Interior.

Secretary-designate Zinke reflected on the impact recreation on public lands had on him growing up saying, “It was on those lands that my father taught me to fish and hunt and the Boy Scouts taught me the principles of environmental stewardship and the importance of public access.”

Referring to former President Roosevelt, Zinke, who currently serves in the U.S. Congress as a representative from Montana, said he believed that Roosevelt “had it right when he placed under federal protection millions of acres of federal lands and set aside much of it as national forests. Today, much of those lands provide Americans the opportunity to hike, fish, camp, recreate and enjoy the great outdoors.”

“The Outdoor Recreation Industry Roundtable supports Secretary-designate Zinke and looks forward to working with him and his team at the Department of the Interior to advance the outdoor recreation sector, grow jobs in the U.S. and ensure that all Americans have access to healthy, active outdoor fun on their public lands and waters,” said Derrick Crandall, President of the American Recreation Coalition.

Rep. Zinke was a co-sponsor of the recently enacted Outdoor Recreation Jobs and Economic Impact (REC) Act of 2016, which requires measurement of the outdoor recreation economy and its role in the U.S. economy.

The Department of the Interior manages 25 percent of the country’s surface area and exercises great influence on outdoor activities throughout the nation, and has an annual budget of $13 billion and administers the Land and Water Conservation Fund, Sport Fish and Boating Trust Fund, Pittman-Robertson Program and more providing more than $1 billion annually in grants to assist outdoor recreation experiences.

“RVIA unwaveringly supports the nomination of Representative Ryan Zinke to serve as Secretary of the Interior,” said Frank Hugelmeyer, President, Recreation Vehicle Industry Association. “Secretary-nominee Zinke understands the significance of the outdoor recreation economy and the need to remove barriers to enable the dynamic and fast growing outdoor recreation industry to reach its full potential.”

“Because the Department of Interior oversees water management and its policies directly impact Americans’ access to federally managed waterways and fisheries for recreation, the role of Secretary of the Interior is of critical importance to the U.S. recreational boating industry and its 35,000 marine businesses and 88 million boaters,” notes Thom Dammrich, President of the National Marine Manufacturers Association. “We stand behind President-elect Trump’s nomination of Ryan Zinke of Montana for Secretary of the Interior given his proven passion for and commitment to the outdoors. We are excited to work with him and his team to advance outdoor recreation for our country, grow U.S. recreation jobs, and ensure robust public access and treasured experiences in the outdoors that also boost our nation’s physical and mental well-being.”

“It is also America’s treasure, our national parks,” said Ranking Committee Member Senator Maria Cantwell (D-WA). “They drive an outdoor economy that provides over 6.1 million jobs and $646 billion in annual revenue. So never underestimate the value of public lands when it comes to recreation.”

Other topics covered at the hearing include:

The four-hour hearing can be viewed online here. 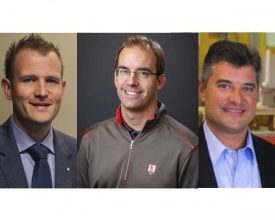