A Cottage Grove (Minn.) broadcaster and mother has been given the opportunity of a lifetime after her family was signed up as a “celebrity endorser” by CNBC star and Camping World mogul Marcus Lemonis.

Lemonis, host of CNBC’s “The Profit” and owner of the Camping World and Gander Outdoor chains, has been giving away campers since the onset of the coronavirus pandemic as a way of encouraging social distancing-friendly family vacations.

It was the latest of these giveaways that brought to his attention Sheletta Brundidge, the Minnesota broadcaster, comedian, and mother-of-four, who had been looking to buy an RV for her family so they could travel, which has become all-but-impossible during the COVID pandemic, as three of her kids are on the Autism spectrum.

She had a chance to win the money earlier this year when she appeared on NBC’s “Ellen’s Game of Games,” but as she put it to BMTN: “My butt lost.”

Click here to read the full story from Adam Uren of Bring Me The News, a Minnesota news and features website.

Step forward Lemonis, whom Brundidge tweeted after he launched his latest camper giveaway when he appeared across her Twitter feed.

Soon after, her legion of faithful Twitter followers added their voices to her bid, saying the Brundidge family were worthy recipients of a camper.

Lemonis listened – and then some – offering her not just a camper, but a Class A RV.

And he didn’t stop there, offering Brundidge a three-year contract to be a Camping World “celebrity endorser,” giving her a travel stipend and payment to produce multimedia content describing the family’s travels across the U.S. 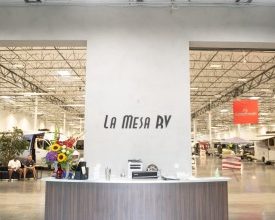