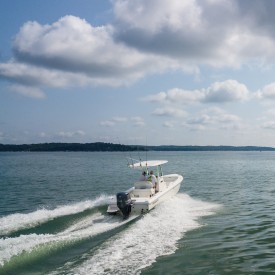 The National Marine Manufacturers Association recently reported that U.S. powerboat sales were about 276,000 units in 2018, up 4 percent over the previous year. The trade association said that was the highest level of sales in 11 years.

Marine expenditures, spending on boats, engines, trailers, accessories and related services, according to the data, were at an all-time high of $42 billion, up 7 percent from 2017.

“Sales of new boats and boating expenditures have been on a consistent upward climb for eight years, with some segments reaching pre-recession sales volumes,” said Thom Dammrich, NMMA president in a statement released to mainstream media before Memorial Day weekend.

Outboard boat sales were up 3 percent to 177,600 units in 2018. This category represents 85 percent of new traditional powerboats sold, according to the data.

Recreational boating contributes an estimated $170.3 billion in economic activity to the U.S. economy, an increase of about $49 billion since the last time the association reported economic impact in 2012.