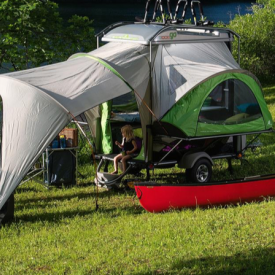 Late last year, SylvanSport made the jump from a manufacturer-direct sales model to a dealer network, and so far, it’s paying off.

In December, the company added former Spartan President and CEO John Sztykiel to its staff in an advisor role as SylvanSport eyed the move to a dealer network sales model.

SylvanSport Vice President of Sales Earl Hunter oversees the addition of new dealers to the network, and said the interest from dealers is impressive.

“We have a lot of dealers actually call us,” Hunter said, noting that the company’s goal is to be selective when adding dealer partners. “And what I try to do is interview them while they’re interviewing me. … I try to find (dealers) who really enjoy using our product, then that makes it easier for them to sell our unit.”

Hunter said the full dealer network would include about 65 dealers, but for its first year under the model, he shooting for between 27 and 35 dealers.

He’s well on his way. The company has announced 10 dealers through December, 2015 and first three months this year, and Hunter said he’s in talks with more than a dozen others across the U.S., hoping to add dealers in Texas, Washington, Arizona and Idaho in the coming months.

But his and the company’s focus will remains on controlled growth, he said.

“We are under-promising and over-delivering for our customers right now,” he said. “Because there’s a thin line between taking orders and being able to deliver to those dealers.”

Because of that goal, the process is not always as simple as a dealer agreeing to sell the product. Hunter wants to make sure the dealer and his staff is all on the same page before moving forward.

“I have a very extensive conversation with the proprietor or owner of the company, and I never sell a product if the (dealer sales) reps are not around,” he said. “Because we need to talk to the sales reps to make sure everyone is on-board.”

The expansion of the dealer network has helped the company’s sales spike early this year, jumping more than 100 percent over the company’s 2015 numbers, according to Hunter.

With the business increase, and the likelihood of more dealers joining in the coming months, Hunter said the company expects to move into a new facility sometime in 2016 in order to up its production capacity.

He wasn’t able to provide details about the deal because the company has not yet finalized the move, but said the expansion would leave SylvanSport in the Brevard, N.C., area and add about 75 percent more space than its current facility.

For more information on the SylvanSport network, contact Hunter at 828-883-4292, or visit the company’s website at www.sylvansport.com.