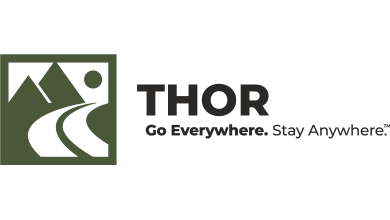 “EHG made a significant contribution to our top-line results for the quarter, and as we move through some of the transitional costs, we look forward to EHG’s meaningful contribution to our bottom line as well,” said Bob Martin, Thor president and CEO. “This transformational acquisition is a critical first step in our long-term strategic plan to expand outside of the North American market. Beyond the acquisition, we have seen improvements in the operating results of our North American segments, reflecting a more stable environment as we finish the fiscal year.”

North American motorized RV sales were $459.2 million for the third quarter compared to the record third-quarter sales level of $598.5 million in the prior-year period. The decrease in motorized sales was driven primarily by lower unit sales compared to the record third-quarter unit sales last year, partially offset by a mix shift toward higher-priced product.

European RV sales were $767 million for the third quarter, the initial quarter reflecting the results of EHG, which was acquired on Feb. 1. European RV gross profit was $54 million, or 7 percent of net sales in the fiscal third quarter. Segment gross profit was impacted by purchase accounting adjustments related to the step-up in the value of acquired inventory, which was subsequently sold during the quarter, of approximately $61.4 million, or 8 percent, of segment net sales.

European RV loss before tax was $30.9 million, which includes the impact of $61.4 million related to the step-up in assigned value of acquired inventory that was subsequently sold during the period and amortization expense related to acquired intangible assets of $12.8 million.

European RV backlog was $687.4 million as of April 30, 2019, reflecting current levels of demand within the European market.

Thor’s third-quarter financial results were impacted by certain acquisition-related items as noted below:

The North American independent dealer inventory rationalization process continued during the third quarter, as North American industry wholesale shipments declined at a double-digit percentage compared with a single-digit decrease in retail registrations through the end of March.

As a result of the lower wholesale shipments relative to retail demand, Thor’s North American independent dealer inventory levels decreased by 20.3 percent to approximately 132,500 units, compared to approximately 166,200 units as of April 30, 2018.

Overall gross profit margin was 11.7 percent in the quarter, compared to 14.1 percent in the prior-year period, primarily reflecting the $61.4 million impact on the European RV segment gross profit as a result of the acquired inventory, which was subsequently sold during the quarter, being stepped up under purchase accounting, as well as the impact of lower North American sales levels and higher relative sales discounts and promotions compared with unusually low levels in the prior year.

North American overhead costs increased as a percentage of sales due to lower fixed cost absorption over the reduced net sales in the quarter. The company’s third-quarter effective tax rate was 24.3 percent compared to a tax rate of 25.9 percent in the prior year due to favorable impacts of certain foreign rate differences resulting from the acquisition of EHG. The company expects an effective rate that approximates the company’s combined federal and state statutory rates of between 21 percent and 23 percent for the remainder of fiscal 2019, before consideration of any discrete tax items.

As North American independent dealers continue to rationalize inventory levels following the unusually high seasonal order and wholesale delivery patterns in the first nine months of fiscal 2018, the company has taken steps to adjust its North American production levels accordingly. A number of Thor’s North American production facilities have reduced their production unit rates, while others have shifted to four-day production weeks, with the option of taking extended holiday shutdowns in the fiscal fourth quarter. Finished goods inventory levels were higher at April 30, 2019 than at July 31, 2018 due to the inclusion of finished goods inventory at EHG, which was acquired at the beginning of the third quarter.

“With the inclusion of EHG into our operations in the quarter, we continue to focus on integration and the sharing of best practices that will drive long-term improvements in margins and profitability for our overall business,” said Colleen Zuhl, Thor’s senior VP and CFO. “As we review our cash priorities, our main focus is to utilize free cash flow to reduce overall debt levels, which were reduced by $40 million during the quarter. Subsequent to the end of the quarter, we fully paid the remaining $60 million outstanding on the ABL facility and made payments of approximately $155 million on our term loan.”

“During the remainder of our fiscal 2019, we expect the North American dealer inventory rationalization will continue, but we expect to see a resumption of growth in the North American markets in 2020,” said Martin. “Currently, our focus is on identifying and realizing the benefits of sharing best practices and operating efficiencies across Europe and North America and continuing to optimize our working capital management processes.” 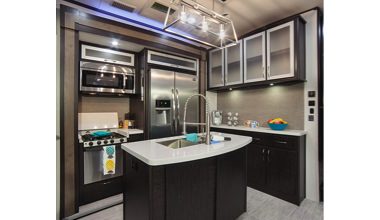 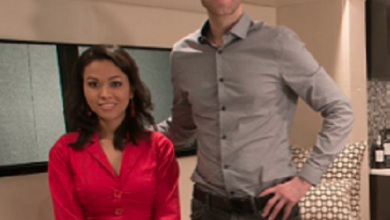