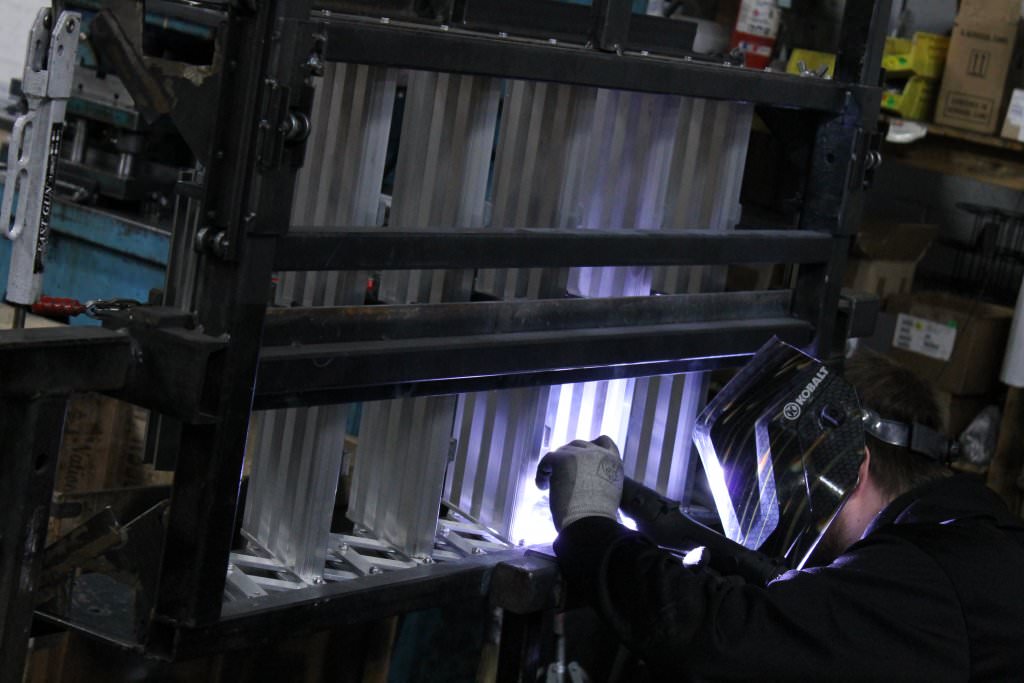 Over the past month, Torklift invited the public to guess the identity of the company’s newest towable product, which had remained veiled until today.

A Torklift employee works on the fabrication of the GlowStep Revolution, part of a new step system by Torklift. Photos courtesy of Torklift.

As part of a promotion, the Sumner, Wash.-based company invited consumers to guess the product that the company expects to “revolutionize the towable industry,” Torklift General Manager Jay Taylor said in a call for participants.

Today, the company will unveil the mystery product, which is a step system for travel trailers, called the GlowStep Revolution.

The product is similar to the Torklift’s retractable step fitting (the GlowStep) for truck campers, but was created to fix common and specific issues with many factory steps, according to Torklift General Manager Jay Taylor.

“The Glowstep Revolution came about kind of in the same fashion that many of our products do: through customer feedback, working with the retail public, the dealers,” Taylor said. “We get ideas and suggestions for new products all the time.”

Specifically, the product aims to solve issues of the springboard action that is created when users step onto standard hanging steps. The GlowStep Revolution attempts to fix this issue by connecting the stairs flush to the ground through an adjustable leveling system.

“If you’re on an uneven surface it can make the steps unstable and even shaky, so we’ve incorporated the all-terrain landing gear into the glow step revolution to tackle that exact problem,” Taylor said.

As a system, the product includes a variety of add-on accessories that solve other common problems. For example, Taylor noticed that the stabilizing hand bar on most coaches doesn’t extend far enough to provide support when people are exiting their trailer.

“If the coach has a three-step or four-step on it, that grab rail is actually behind the person,” Taylor said. “So in order to be able to handle that rail, they have to almost reach behind them until they’re all the way to the ground.”

The handrail addition, called the GlowGuide, can accommodate two-to-seven steps, and adds an additional 50 pounds of capacity to the 325-pound-rated aluminum-made step system.

Unlike typical RV stairs, the Glow Step Revolution doesn’t include holes in the stair steps, which are added for grip, but can be uncomfortable on bare feet and intimidating for dogs and other pets, whose claws may get snagged in the holes.

The company also offers a backing for the stair system that fills in the gaps between stairs, making the rise more comfortable for some users and their pets, Taylor said.

The step assembly is designed to be a quick, bolt-on installation, taking about 15 minutes to install.

Although the company is introducing the stairs as an aftermarket product, Taylor said the product is manufactured to the RV Industry Association’s OEM standards and that the management team at Torklift will let the market decide the breadth of its application.

“You might see it progress to all levels. … As it starts off it’ll find its own channels,” Taylor said. “We’ll push it to any and all markets out there that are available because it has so many cross-over applications that we believe its going to be a terrific product in the upcoming year for Torklift.

The product is on pre-order now, and the company plans to begin shipping by Independence Day, Torklift President Jack Kay said.

“That’s kind of a play on the name of the product there but its called the Revolution so we figured Independence Day would be a great day to make it available,” Kay said.

Lazydays is Set for Season 2 of Travel Channel TV Show