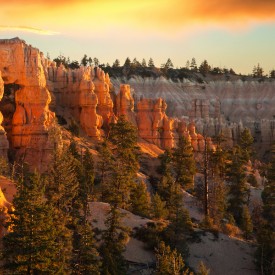 President Trump said Wednesday that his administration would begin to reopen national parks as states relax restrictions meant to curb the spread of the coronavirus.

This story by Morgan Chalfant and Rachel Frazin originally appeared in The Hill.

“Thanks to our significant progress against the invisible enemy, I am pleased to announce that in line with my administration’s guidelines for opening up America again we will begin to reopen our national parks and public lands for the American people to enjoy,” Trump said during a tree planting ceremony at the White House recognizing Earth Day.

The National Park Service (NPS) has closed many public sites across the country, in accordance with state and local authorities, to lessen the spread of the deadly virus, which has sickened more than 800,000 people in the U.S.

The White House on Thursday unveiled guidelines to help states and counties formulate plans to begin relaxing coronavirus restrictions and reopen their economies. Several governors have since announced plans to allow some businesses to reopen in the coming weeks.

During his remarks Wednesday, Trump gestured to Secretary of the Interior David Bernhardt, who was among a small group of attendees, about a timeline for reopening parks. Bernhardt indicated the decisions would be made in conjunction with governors’ plans.

“You have a lot of land to open up, too. People are going to be very happy,” Trump said.

Bernhardt later tweeted that he would “gradually reopen our National Parks in a safe manner.”