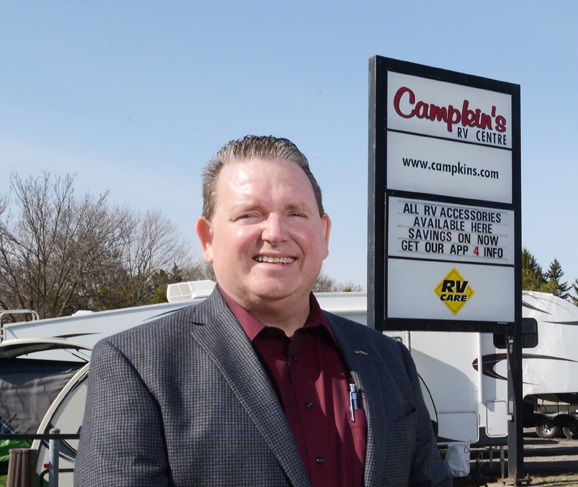 Roland Goreski made some changes to his dealership’s show strategy this year, adding computers for consumers to conduct research in the booth. (Photo by Sabrina Byrnes)

Dealership sales personnel are often miffed at the growing number of consumers using their cell phones to research products as they’re shopping, but the trend gave Goreski an idea.

As an experiment, he decided to deploy computers at a show booth at the Toronto RV Show in January, allowing customers to do research on units in the booth.

“We see them in the booth shopping online,” Goreski said. “They’re there comparing to prices online, and we just provided them with computers to do that themselves. They could walk up to the counter and look up whatever they wanted online.”

Despite lower overall attendance at the January show, Campkin’s RV was able to buck the trend.

The Myrtle Station, Whitby, Ontario, dealership closed about 40 deals at the event, more sales than the company has had at a show in its 42-year history. A month later, Goreski tried the strategy again, closing 31 deals at a show in February.

“We pursued additional discounts from our manufacturers and we passed those onto our consumer, making sure that our pricing was absolutely the best, aggressive pricing it could be,” Goreski said.

Combining the low pricing and computers allowed customers to find out for themselves if the pricing was as low as Campkin’s sales personnel claimed.

“Today’s consumer is so much more savvy,” Goreski said. “They’re doing a lot of online research before making a purchase, and whether they’re using a tablet or their telephone, they’re doing it. We just provided them another way to pursue that same shopping that they’re going to do anyway.”