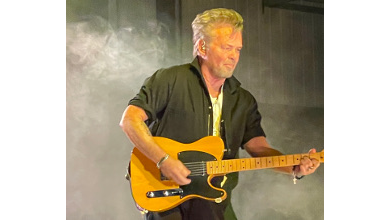 John Mellencamp and his band performed at the Forest River Expo entertainment hall on Tuesday night andreminded the excited audience why he’s in the Rock-n-Roll Hall of Fame. “Authority Song,” “Small Town,” “Pink Houses,” “Cherry Bomb” – the Bloomington, Indiana, native appreciated the crowd signing along with every tune whether he encouraged them to or not, and most times he did. A highlight was when it was only Mellencamp, his acoustic guitar and a spotlight, and he delivered a heartfelt rendition of “Jack and Diane” that brought tears to the eyes of many an audience member remembering that the first time they heard that tune they saw themselves as identifying immediately with one of the characters in the song: “Two American kids doing the best they can.” 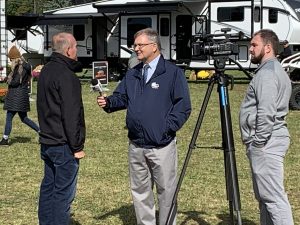 How much do you suppose the Elkhart region missed having Open House Week the past two years? “Millions much” might be an accurate way of putting it. The economic impact of Open House Week on the region is easily in the millions of dollars, and there’s very few on the receiving end of that largesse – the hotels, restaurants, gas stations, etc. – that don’t go out of their way to make visitors feel welcome. Sure, there may be a couple – but they probably are lousy at customer service the other 51 weeks of the year, too. The media – in this case WNDU – of course report on the mass convergence of people to the area. Here, a reporter conducts a “stand-up” with a Grand Design representative.

Mellencamp wasn’t the only big-name artist to headline at Open House on Tuesday night – country band Florida Georgia Line performed, drawing an entry line that wrapped the circumference of the THOR Pavilion. The band was rumored to have split recently, yet came together to perform top hits such as “This Is How We Roll” and “Cruise” for Open House attendees at the THOR exhibit. The night was chilly and damp, but the crowd stayed through the show – with some skipping out a few minutes early to avoid the traffic leaving the RV/MH Hall of Fame afterwards.